To that end, I bought 6 pages at Michael’s yesterday.  The pages are fairly cheap if you only look at the fact that they are a quarter, and overlook the fact, that I was paying a quarter for one sheet of paper.  Albeit, beautiful paper.  P got to pick out some which he was almost excited about.  I will get some photos of the projects soon.

So I eliminated seven things from my wardrobe.  Two of those were a beautiful skirt and a tank that happened to be the same color.  However, the tank had a spot in a very difficult area to conceal and the skirt ALWAYS made me look frumpy.  But I loved the edge on the skirt.  So I combined them to make a lovely pillow case.

Here’s a close up of the embroidery.  The pillow turned out quite lovely.

I did get rid of 5 more things to give away.  So I was down 7, however I found 3 things I had not yet counted so I am back up to 155.  The battle continues.  I do believe if I get rid of everything that doesn’t fit me, or look good I can make it.

I seem to spill on my clothes a lot.  I try to put spot remover on the spots but sometimes they just don’t come out.  This technique would also work if you had a hole in a garment.

I  had spot on this striped tank.  Besides the spot, it was a great shirt good fit great colors. 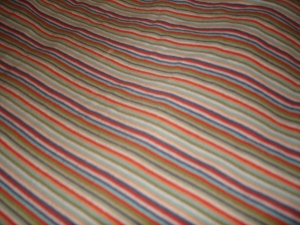 It’s right in the middle front.  I thought about an applique.  I’m not really an applique girl.  I used to do it to mend my kid’s clothes but I am an adult.  I rarely even wear t-shirts with logos.  The only logos I wear is ironic logos ie A&W shirt or shirts that are so obscure that no one knows really what to make of them.

Anyway, the first step was to cut the spot out.  I cut a strip all the way through the shirt all the way around. This was easy because it was striped.  I could just follow the stripe around the garment. 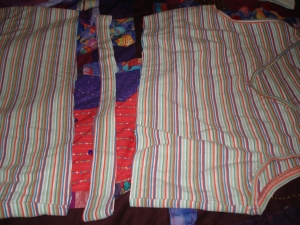 Then, I got a second shirt out. It was also spotted in several places but overall, except for its color, it didn’t have much going for it. I put it on and then layered the tank over the top.  Then, front of a mirror (or if you have an artist husband, in front of him), I moved the bottom part of the tank up and down until I had a pleasing amount of space between the two. I measured the space. Then I cut a strip from the second shirt to that width.  I sewed that strip in place of the strip I had cut out.  Then I had this: 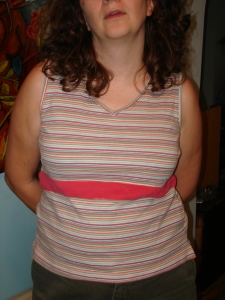 Now when I do it next time, I will make the strip slightly smaller than the top I am inserting into. My strip does bubble a little bit.  But overall I love it.  It has an empire effect which is always great on me.  I just had validation of this from Tim Gunn’s new book: Tim Gunn: A Guide to Quality, Taste and Style (Tim Gunn’s Guide to Style) .  He recommends the empire waist for people with a belly.  This silhouette is in style now too.  However, many empire styles can make me look a little pregnant.  Because this top has no gathers, just a visual line at my skinniest spot it does slim me by drawing the viewer’s eye to it without adding bulk to my belly. 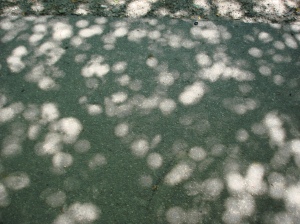 I love this pattern.  I took this picture last spring on the Parkway. It seems like a ready made fabric or quilt.

I just read about the 100 thing challenge.  I immediately thought of the two areas where my hoarding tendencies are barely held in check: my clothing and my craft materials/tools.  So I did a quick inventory of my clothing.  I have a book that is a visual catalogue of all my clothes.  Perhaps it is a sign that I have too many things that I have photos of all my clothes.  Anyway, it makes it easy to count.  I have 163 items of clothing.  This does NOT count socks, underwear and various foundation pieces.  Also, a few things I bought this summer to wear next winter.  SO!  I am going to try to get down to 100 items.  I am not quite sure if I will include each undergarment or categories of items.  It seems like a cheat.  If I just said:  shirts or even short sleeve shirts, I would definitely be under 100 items.  Anyway, I think achieving the 100 items with categories for undergarments will be a major breakthrough.  By the way, this does include jewelry and shoes.

To begin this process, I will go through my items again.  This time, I will look at each item by comfort, style and whether I have worn it in the last season appropriate for it.  I know this is crazy, but I can’t help it, my inner hoarder has to be rationalized.

On the other end of the spectrum is my craft room.  In that room, I am only using categories.  I have to.  I have over 100 drawing items, pieces of fabric and beads.  I am at sixty categories or things.  I am trying to make the categories not too broad.  I did get rid of five things yesterday.  Good start.

It was my son’s birthday and my other son birthday is coming up so I made several cards to use as thank you notes.

I used calenders to cut out patches of color and then attach them to small pieces of photo paper.  On these I colored some dots with marker, also.  Steve said that was a little much.

I love these three because two of them are like exclamation points.  The one on the left is the Washington monument.  See if you can guess which two were made by Steve.  That is one of the things I love about him.  If you bring him a bunch of materials and a finished card he can springboard his own ideas and visual stamp on them on a dime.  Then, I can build on what he is doing. 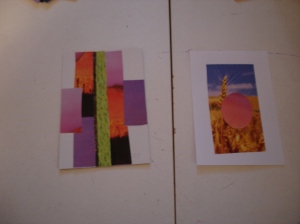 This last one is my favorite:

I made it, but I think it really reminds me of two of Steve’s assemblages Under the waterfall and Lovers in Spring.

What can you do when a garment you really like gets a hole in it?  Of course, you can patch it but what if you make the repair a design element?  I love this shirt with its funky tie dyed background with a strange mystical symbol.  It also happens to be a unique color from my color chart.

However, it had two little holes one on each sleeve.

So I marked a line on the sleeves from top to hem intersecting the hole.

I like the ruffle edge of the cut edges.  Since it is knit it won’t ravel but after washing a few times it gets kind of wavy.

I may at some point bring the sides in a little on this t-shirt to make it more fitted.  I do this to a lot of t-shirts.  I’m not sure because I like the oversized comfort of it. 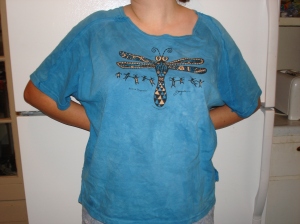 You can see that I made no effort to make the seams symmetrical.  You could try to do this, but I kind of like the rough unevenness of the finished garment.