This mending topic is really interesting to me. Because of the level of energy , fabric memories and meanings I put into the initial quilt, I have a great emotional attachment.  Then, as I use the quilt, touch it and look at it on my bed, I have even more of a connection.  So when the quilt begins to enter into its end life I am sad. I mend far beyond what I probably should. Then, I cut it up and recycle it, to mixed results.  I have one of my grandmother’s quilts that has another prettier but really worn quilt inside.  I know that it was frugality that made her use the quilt as a batt, but I wonder if it was also an emotional thing.  In any case, one of my goals in 2013 was to catch up on my mending and I just finished mending this quilt, which I call the fish quilt. 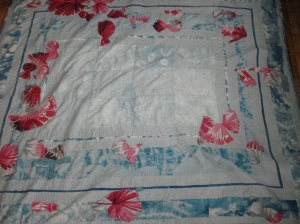 Now this quilt I made when I was working at the sewing machine store.   That was one whole eighth grade boy ago.  Or three jobs ago.  In any case, this is a light weight summer quilt.  When I was in college, I took a surface design class and the professor made a garbage can full of indigo dye.  I knew that I would probably never have a chance to use indigo (and that has held true) so I took tons of fabric over and dipped it.  The rectangles in the center, which unfortunately have faded (indigo fades very fast, think of jeans), were my samples for the class.  I regretfully used a crappy grey fabric for the borders which is slowly decaying.  So the red “fish” are actually patches.  I added some more of these and then I rebound it and it is all mended. Aforementioned eighth grade boy was wrapped up in it last night.

Now, I had meant to mend Steve’s t-shirt quilt this month.  It is a quilt that is beat the heck.  I began to patch it, then realized that the back was so worn, it would be better to lay whole new back on.  This t-shirt quilt is a contemporary of the fish quilt, but the fish quilt’s back is so much less worn.  I was pretty broke when I made the fish quilt and I used a cotton/poly blend for the back.  It is not as pretty but it certainly has worn so much better than the t-shirt quilt with a cotton quilting solid back.  In any case, if the top was less worn, I would just reback it.  However, it also needs considerable mending. So, I decided that I would remake the whole quilt since Steve still has a lot of feeling for it.  I will eventually cut out the pieces that are still functional and use them in a new quilt for him.  Since I have a large quilt in progress that I want to finish in the next few months, I don’t want to dive into another big project right now. 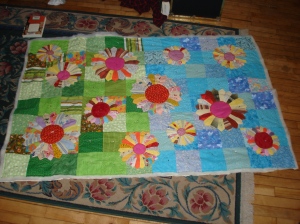 Yes, I got the quilt center machine quilted.  It’s such a cheerful springy quilt to work on here in the freezing cold. I have to say my intern worked on it all week.  She did two or three flowers a day.  These photos show the quilting poorly, but I did half echo quilt and half in radial pattern from the center reinforcing the idea of the sun.  Steve and I are having an artistic difference of opinion on this one.  He says it’s done.  I still have four finished blocks that I want to use for the frame including the quilt’s namesake: the ducky block.  To this I plan to add some improvisational piecing.  Also, now it is only as large as a large lap quilt or baby quilt and I wanted it to be bigger.  I think I will make up the frame and lay it around the quilt to see if my idea will work.

By the way, I love this large-scale quilt as I go.  When I make the frame, I will quilt it and then attach it to the center.  It was so much easier to handle and baste this way.  I still got a little pleating on the back, but not bad. 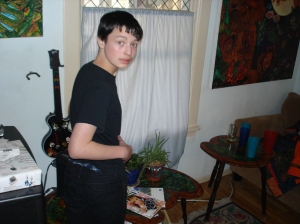 And who else is no longer a flimsy?  Here he is with the classic mom-you-are-so-annoying face. 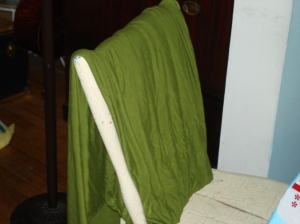 Here is another “Get it done” item done!  I bought this fabric last week.  I also bought a pattern: McCall’s 6713.  If you look at the link the girl is on a bike.  Hopefully, I will actually be able to ride a bike in this dress.  That would be awesome.  I love the forties sort of style, and usually a wrap silhouette is flattering for me. I am a little unnerved by the shoulder pads, so I didn’t buy them.  Having lived through the eighties once, I tend to cut out all shoulder pads out purchased garments.  Also, as I have gained a little weight since the eighties, I feel like I probably don’t need them. In any case, I figured I would go back to the store and get them at the end if I wanted to.  I had hoped to cut the dress this weekend but I didn’t get the fabric ironed.  I did get the center of the ducky quilt sandwich basted, so I guess one morning of crawling around on my hands and knees per weekend is enough.  I plan to have my intern quilt a little bit every day this week on the quilt, then may be next weekend I will get the dress cut out. 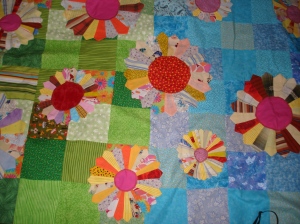 I finished the center panel of this quilt.  I first added the centers to the Dresden plate blocks.   I was just pinning, then appliquing, but I had a few annoying pleats. So I gave up on that and used fusible hem tape to tack the centers to the “petals”. Then, I  did the satin stitch around the centers with a piece of scratch paper underneath to add stability.

When I attached the flowers to the panel, I stitched down the first one by hand. It took forever and I wasn’t really completely happy with the way it looked anyway.  So again I took pieces of hem tape and just tacked it down.  It is ready to be basted now and quilted. The quilting will permanently attach the flowers to the background.  Yay!  Tomorrow morning I will lay it out on my living room floor.

I have two ideas on how to quilt it.  One is to circle the center, then radiate out like rays in straight lines down the center of the petals.  I am concerned that I may not be able to achieve nice straight lines but I like this way best. The second is just to quilt around the edges of the flowers and the repeat the pattern out.  I still have some thinking to do about it. 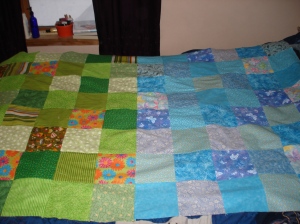 I finished piecing the center part of the ducky quilt.  It is so pretty.  I already have one flower appliqued and high hopes to get the rest pinned today so I know where they should go.

I decided that even though Judy won’t be doing the ufo projects, I wanted a list of goals and dreams for 2013. So I have a three-part list, the first part is garments:
1. I plan to make four garments for myself this year one per season.
2. I also have some pieced fabric that I want to make a garment out of possibly a robe.

The second part is UFOs.

3. Ducky quilt.  I want to get this one done by spring for sure, but I would love to get it done by February. 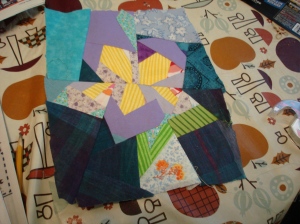 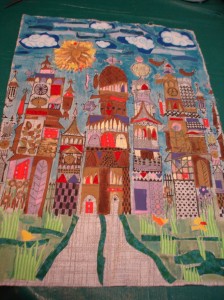 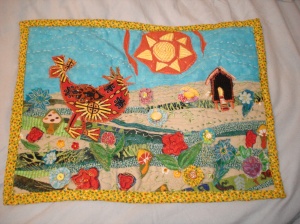 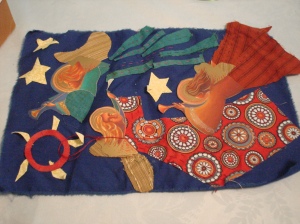 The third part is mending:

I’m following along with Judy’s Getting it Done project at Patchwork Times.

So for January I really want to get done:

1. Get the background of the center part of the Ducky quilt pieced.

2. Get the flowers appliqued to the center part of the Ducky quilt.

3.  Pick a pattern and fabric for my first garment of the year.

Things I seriously hope to get done:

1.  Get the center part of the Ducky quilt basted.

2.  Get the center part of the Ducky quilt quilted.

4. get the fabric for my first garment of the year cut.

So here we go!