This fabric has been with me for a long time. This is a group of Steve’s Hawaiian shirts. He hardly ever wears this type of thing, but because he was born in Hawaii, he has an attachment to Hawaiian things. Initially, I sewed cut them up and sewed them together randomly. This was not successful. Then I made a muslin dress base. I cut them up more randomly and sewed them on to that base. This was also not successful.

The dress hung on my design wall for some time. Then, I machine quilted across the large sections in one inch parallel lines. Other parts I sewed together and then ironed to fusible interface. Then, I cut them up into 9 inch squares. Here is the results: 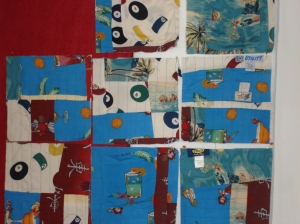 I have many ideas how to put these together including putting them on point. I haven’t done this before so there will be some math required. I very pleased with the outcome. Even though we really don’t have any use for another quilt, Steve has called it for himself. He has a pretty valid claim since they were his shirts.