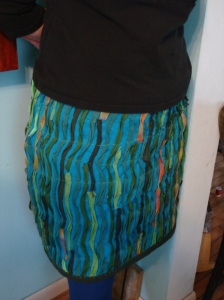 I almost have finished a skirt. This project has come in under the radar. It is one of my after dinner trying to diet not eat projects. Back in September, I made a bolero jacket with striped pieced sleeves.

That was pattern is from Alabama Chanin, and it was Natalie Chanin’s influence that gave me the idea to work the sleeves with the pieced stripes. When Steve saw it, he suggested I make a skirt with this striped technique, making the stripes vertical. A long time ago I saw one of the designers on Project Runway do a technique where they had taken strips of silk chiffon and sewed them down, leaving the edges free, then sewed across the strips at right angles one way then the other to create a wavy sort of pattern. I used this technique on the skirt instead of the pieced stripes that I used on the bolero.

This is the same pattern as this plaid skirt I made several years ago, New Look 0119. I traced the pattern and made it without pleats because I was afraid of bulk. I thought I may have to put a zipper in because the horizontal lines might make the skirt not stretchy enough to get into without breaking the sewing. However, it did have enough ease since I left the pleats out. I added a green binding and inserted 3/8 inch elastic. It is very comfortable. All and all, I am happy about the structure of this skirt. I don’t know if I would do this surface treatment again because it took a long time- I have been working on this garment since September.

When I finished the entire skirt and tried it on, Steve felt there was too much contrast between the lighter colored strips and the darker ones. I wish I would have only used three colors, the dark green, mid tone and the gray-green turquoise. I considered removing the light ones and the red/brown ones but the seam ripping was just too much with both the vertical and horizontal seams. Instead I decided to over dye the whole garment. It is in the dye bath right now. I chose a color about the same color as the background fabric. I will let you know next week whether it is successful.